Tanner Tweedt homered twice, including a grand slam, and drove in seven runs to power the Colt 45s past the visiting Tehama Bulls Thursday night, 15-5. His two-run homer in the third and slam in the sixth helped Redding overcome an early 5-0 deficit to down the Bulls for the second straight night.

Winning pitcher Jordan Akins (2-1) stepped in for injured starter Colby Milligan in the second, going a season-long six innings, allowing no earned runs (one unearned), and two hits, striking out 11 and walking one. Jeff Kross and Julian Kodama each pitched a scoreless inning of relief to complete the win.

The Colt 45s continue their next-to-last week of the season Friday night against the Bay Area PFU (Pacific Union Financial) Capitalists at Tiger Field for the first of three games between the clubs. Games Friday and Saturday begin at 7:15 p.m. and Sunday night’s game starts at 6:15 p.m. All home games are broadcast live on KCNR radio (and on the internet), with veteran sportscaster Brent Weber handling the play-by-play.

A box score of the game can be found here. 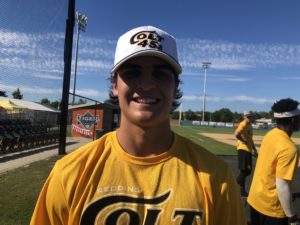