Nick Horsley’s three-run homer in the 6th broke a long scoring drought for the Colt 45s, and speed and daring on the basepaths in the 8th provided the winning margin, 6-3 over the Ringtails at Tiger Field.

Jeff Kross (2-0) earned the win on his 23rd birthday with three innings of shutout relief, and Billy Plummer turned in his first save with a perfect ninth for the Colt 45s, (16-15). Starter Zac Billingsley and Ringtails hurler Nick Sanderson locked up in a pitchers duel early, with Billingsley allowing three runs in five strong innings. Sanderson allowed nothing until he left after five. His replacement gave up Horsley’s first home run of the summer, tieing the game at 3-3.

The Colt 45s added three in the eighth. After Ty Brogdon was hit with a pitch, Horsley beat out his sacrifice bunt attempt. The next batter, speedy Andy Beyene, did the same, and when the pitcher threw wildly to first, Brodgdon and Horsley scored. Beyene attempted to score on the play as well, but was thrown out at the plate. Two more walks and steals by Tyler Thompson and Julian Kodama led to a throwing error by the Ringtails catcher, bringing in Thompson with the final run.

The Colt 45s host the Fairfield Indians Saturday (7:15 p.m.) and Sunday (6:15 p.m.) at Tiger Field in Redding. Gates open 45 minutes before first pitch. All home games can be heard via livestream of the broadcast on KCNR Radio or via the www.reddingcolt45s.com home page. 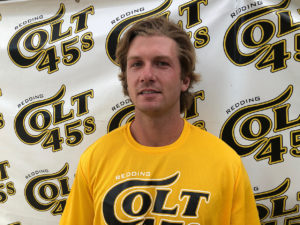