The Colt 45s scored two runs in the first inning, Brendan Roop‘s run scoring double the big blow. Kyle Schroedle worked his way out of several jams and allowed only two runs 3 2/3 innings work, helped by reliever Jacob Marquez, who got out of a bases loaded jam upon entering the game in the fourth. He was later tagged for four unearned runs in the sixth before the Colt 45s rallied for the winning runs in the bottom of the seventh.

Redding was out hit by Chico 7-6 but got to starter Javier Martinez for two more runs in the third, keyed by Colby Harrison‘s RBI single. The four runs in the seventh came at the expense of reliever Quentin Gago (0-1), who allowed only one hit but walked four and hit another batter in one and a third innings of work before leaving with a right hand injury. Beyene’s two run single was the only hit in the four run seventh that included three walks and a hit batter.

Tyler Thompson had two hits for the Colt 45s, who improved to 7-4 on the summer. Chico dropped to 0-4.

The night also featured live demonstrations by the Redding Police Department’s K-9 Unit as part of the We Back the Blue night.

All Colt 45s home games can be heard live on KNCR radio in Redding, with a link to the broadcasts available on the home page of reddingcolt45s.com. You can also follow every pitch of the Colt 45s games through the “point streak” feature, also available through a link on the website. 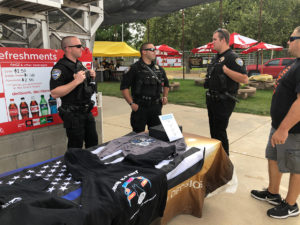 Redding Police Department takes part in We Back the Blue night, June 8, 2019. Photo by Brent Weber