A Memorial Day crowd saw the Colt 45s use small ball and daring base running to edge the visiting Redding Ringtails, 3-2 Monday night. As a steady rain threatened the outcome in the sixth inning, the Colt 45s manufactured the tying and go ahead runs, scoring on a passed ball, followed by Andy Beyene’s successful safety squeeze, plating Daniel Duarte with the eventual winning run.

It was Thank You First Responders Night at the ballpark, with representatives of North State organizations on hand to help with a pre-game flag ceremony and more.

With the Colt 45s leading 3-2 in the seventh, the contest was officially called due to wet conditions as a 6-inning rain-shortened game. The Colt 45s improve to 2-1 after an opening weekend that also included a rainout on Saturday night.

The winning runs came in the 6th as Ringtails pitcher Cooper Davis walked two, and after two wild pitches moved runners over, a passed ball allowed Nick Schroedle (Crown College) to score, evening the game at 2-2. After Dylan Lum replaced Davis on the mound with runners on the corners and one out, Beyene’s (Regis University) safety squeeze plated Duarte with what proved to be the winning run.

Veteran lefty Bradd Miller, an emergency call up to the Colt 45s pitching staff, pitched one inning, striking out one and allowing one hit in relief to earn the win (1-0). Jordan Akins (Shasta College) was solid in his first start on the hill, throwing 5 innings, allowing 3 hits and 2 earned runs while striking out 5. Austin Ruffin’s solo homer in the 5th gave the Ringtails the lead, 2-1. 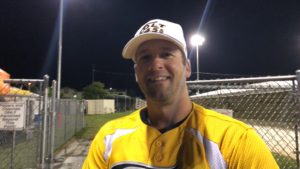 Catcher Kyle Schroedle (Crown College) was 2-2 with a double and two runs scored. Duarte was 1-2 with the deciding run scored and one RBI.

The Colt 45s return to action at Tiger Field Thursday night at 7:15 pm against NBA Baseball from Citrus Heights, California. Thursday is Bark in the Park Night, as Haven Humane brings some adoptable furry friends to meet fans and hopefully find new homes.

Keep up with the live stats and post-game stats of home games on our website. Details and box score for this game can be found HERE.